Along the Carretera de Collblanc, in an area of L’Hospitalet not too far from Camp Nou, lies both an electrical substation and abandoned land with buildings. There is nowhere to park along the Carretera, but running almost parallel to it is Avinguda d’Manuel Azaña. This road has construction and empty land and is therefore used for the ever-elusive parking. I became acquainted with it not because I was searching for parking, but because I was searching for new and faster ways to get home. In the daytime this road is harmless. At night, it is a place where prostitutes solicit their wares. (It doesn’t seem the place for your higher-end prostitute. Too dark.)

My main goal was to take a photo of this building, from Carretera de Collblanc, but my parking spot on Av d’Manuel Azaña allowed me to get a view of the other side.

There’s a hole in the fence on this side that allows you to take a well-worn path down to some make-shift parking off of Collblanc.

Having taken the shortcut, I was then able to snap a photo of the original side that had sparked my interest.

And take a shot of the impressive gate.

Down the road is this building: 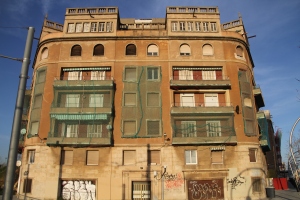 END_OF_DOCUMENT_TOKEN_TO_BE_REPLACED

Yesterday’s adventure took me to some of my old haunts. I went looking to take pictures of things I had seen in my commute but had never taken the time to come back to when I could actually stop for the photos.

Last year, on my drive home from practice, I often took a road running behind the Real Polo Club de Barcelona. It was appealing for both it’s lack of stoplights and for its interesting scenery:

Aigües de Barcelona is the company in charge of water distribution in Barcelona and other nearby municipalities. In the background you can see the Hotel Rey Juan Carlos, where the visiting footballers stay.

This road continues and runs below the Carretera de Collblanc, where you can pass through a tunnel made of stone but now mostly covered in modern metal and concrete. 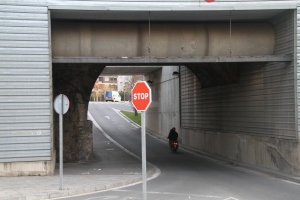 On the way down to the bridge, after the Aigües, is a volleyball court, here used to play a football-volleyball hybrid.

And from below, you can see some of the new construction along the Carretera de Collblanc: