Posted on December 3, 2013 by criscopolo

“Enhancement” project using Photoshop for my photography class. This is the castle of Volterra, Italy, which is actually currently a prison. I visited in November 2013. My friend wanted to see it due to the town’s relation to the Twilight novels.

After riding on Sunday (read about it here), I needed something to eat. As it was Sunday, the only supermarket open was the huge Coop, and it had already closed. I decided to drive around and see what else was available. I ended up deciding to continue all the way to Arezzo. Now, I studied abroad in Florence for a month in 2007, and I took a few trips outside the city one weekend. Two friends and I went to two smaller towns on Saturday and two more on Sunday. I could tell you three of the four towns we went to (Pistoia, Cortona, Lucca) and could remember two well enough (Lucca because I went a second time two years later and Pistoia for god knows what reason). But I couldn’t say which of the other memories I had was of Cortona, or even what city the last memory was of.

Well, I quickly found out that the last city I had visited was Arezzo. So, here I was again, this time arriving by car.

The last time I had been to Arezzo I was taking a black and white film photography class. I had gone on a trip to Barcelona and lost my digital camera on the way back (losing, in the process, photos of a double rainbow over the Ponte Vecchio. Oh the agony!). Because of this, all the photos I took during these trips were on film in black and white. I was also doing everything on manual. Unfortunately, most of my photos did not turn out well. Of course, I felt that my photography skills must have been seriously lacking. Only later did I find out my lens was broken…

It was my lucky day! To arrive in a city I had been to before but this time armed with a much better camera and improved photography skills.

END_OF_DOCUMENT_TOKEN_TO_BE_REPLACED

I think it has been about eight years since I’ve done any kind of real horseback riding. This is strange for me, since from the age of 5 to 20, I rode at least four or five times a week (except during water polo season). I knew when I entered high school that I would put horseback riding secondary to water polo until I was finished with water polo, but I have always considered myself a horseback rider, even through all the years I haven’t done it.

The break started because I decided to retire my horse. She was getting older and more injury prone. My mom had sold her horse and would no longer be at the barn to look after mine. It was a tough decision because I knew that it would mean my horseback riding career would be put on hold for the foreseeable future. However, it was also an easy decision because I knew it was the best thing for my horse.

At my level, it is difficult to ride without owning your own horse. Of couse, I could always “school” other people’s horses, as I’d done for many years, but there is a limit to what you are able to do and the amount of time you can spend with that horse. And owning a horse requires a commitment that I did not have time to give.

I have avoided riding for the last eight years, due to both logistics and grief for my horse who was put down in 2009. But recently I’ve decided that it may be the moment to return to an old love of mine, even if only in a small way.

END_OF_DOCUMENT_TOKEN_TO_BE_REPLACED

Oddly enough, I’ve never rented a car while traveling. Of course, I’ve had to rent a car when visiting San Francisco or other places like that, but I wouldn’t consider that traveling. Not only am I just visiting a place I’ve already been, it is still in the country.

A little over a year ago I went to Santiago de Compostela, and what I really wanted to do was get in the Atlantic Ocean. However, there was no way I could visit using public transportation and still make it back in time for my evening flight. The hotel suggested that I rent a car, but for some reason I felt it was out of the question. For my own unknown motives, I didn’t get to do something I wanted to do. I vowed next time I was going to rent a car.

For all that I’ve travelled in Italy, I was nervous to rent a car. I’ve driven in Spain, which isn’t all that different, and I’ve always been excited to try my hand at driving with the crazy Italians. What was there to stop me? It sounded like fun. So, I did it. (Read about the car here).

It took me way longer than it should have to get to the hotel. Neither the GPS nor my cell phone was working properly, and I couldn’t figure out exactly where the hotel was. Eventually, I got the electronics working, and, as it turns out, if I had gone 50m more from where I originally turned around, I would have found the hotel. Ah well.

The hotel’s name is Tenuta Il Burchio. It spreads across a one-lane-but-made-for-two-cars street. On one side is the hotel, a white-washed building with wooden window frames and an old tile roof. The other side has an extra building (one room, sided on three sides by glass windows) surrounded by a brick patio and tables. This is where breakfast is held. Behind it, reached by walking along some pine trees, is the 15m pool. Behind the hedges bordering the pool is the stable. That, however, is a separate property from the hotel.

END_OF_DOCUMENT_TOKEN_TO_BE_REPLACED

Incisa in Val D’Arno: Part I, The Vehicle

I came to Florence two weeks ago with the goal to play on an Italian water polo team. I arrived on a Tuesday, but had about a week before practice started. I spent three days sightseeing in Florence, visiting the smaller things I had never seen (read about that here). By Friday, due to the heat and crowds, I decided to get out of the city. Recalling a place I visited with friends four years ago, I searched out a hotel that would be in the countryside.

What I found wasn’t as remote, but it had it’s own charms. What sold me on the hotel, besides the pool, was the stable and the possibility to ride. So, I rented a car. 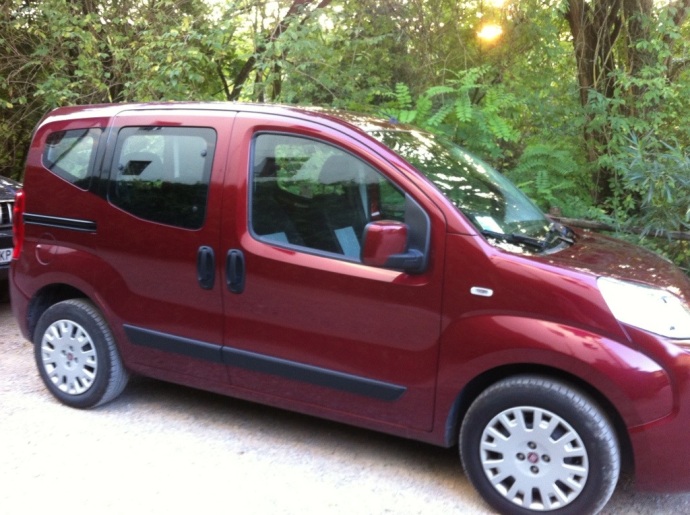 I thought I was getting a Fiat Punto Evo, which seemed like a decently cool car. Instead I got the Fiat Cubo, which felt more like a mini work van. And was decidedly uncool.